In this behind the scenes episode, our host Lizzie Oakes shares some of her own Erebus journey, how she came to make the podcast and the lessons she learnt.

On the 28th November 2019, 40 years on since the Airline Disaster, the Erebus Families finally received an official apology from the Government and Air New Zealand. But what exactly does that apology mean to family members?

Sarah Myles lost her Poppa Frank Christmas on the flight.  She talks of her recently published book Towards the Mountain, a Story of Grief and Hope Forty Years on from Erebus and of how important it to is to talk about the things that cause us pain in our lives.

David Allan (72) lost his Dad Malyon, his Mum Marjorie and his sister Jane who was in her last year of high school.  He talks of how he practically got through in those early days and of how important it is for people to be straight up and tell it like it is.

Dan Moloney lost his Dad, Nick Moloney who was the Flight Engineer on the sightseeing trip.  He talks of the impact Erebus has had on his life and of why an Erebus National Memorial is important for all New Zealanders.

Miriam Clancy is a Kiwi Singer/Songwriter based in New York.  She lost her Aunty Marie Clancy Wolfert, who was on board as a  Flight Attendant.   Miriam speaks of the wider implications her Aunt’s death had on her family and shares her song Ex Erebus.

Carolyn Head (Lizzie’s big sister) was in London on her OE at the time of the accident.  They chat of a much loved Nan and of how difficult it was to be so far from home when the accident happened.

Jim Collins was the Captain of the fatal flight. But how did his family cope after the much loved Father & Husband died and then was falsely accused of causing the crash? Kathryn Carter, his eldest daughter, shares precious and personal memories.

Paul Gilberd was at primary school when his Poppa Peter Tanton took the trip to Antarctica to celebrate his 60th birthday.  But the night before flying, Peter had a troubling premonition.

Denise Roper was a young Mum when she heard the news that her fun-loving, happy go, lucky Dad, Frank Christmas had died on the flight.  She speaks of the impact Erebus has had on her life and of the journey that helped bring healing to her heart.

Rev Richard Waugh is a busy man with a big heart.  He’s a  Minister, Chaplain and Aviation Historian and although Richard didn’t lose a loved one on board, he’s made it his personal mission to ensure the Erebus Families have a National Erebus Memorial.

At 18, Mark Head (Lizzie Oakes’ older brother) was on a cargo ship at sea, when he heard the news that Nan, Muriel Harrison had died on the flight.  Mark shares a very real, raw and honest account of his journey to forgiveness.

What was life like in New Zealand in 1979?  We set the scene, by travelling back in time and seeing New Zealand through the eyes of a 10-year-old Lizzie Oakes.

On November 28th 1979 an Air New Zealand sightseeing flight crashed into the side of Mt Erebus killing everyone on board.  Lizzie Oakes was 10 when she lost her Nan on the flight, 40 years later she talks with others whose lives have been impacted by the disaster. 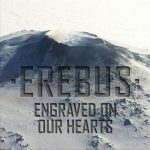 Erebus Engraved On Our Hearts
Trailer